On this page you will find information about what to do in the nearby area, subdivided into nature, active, culture/cities and winter activities.

Broumovske Steny: The Broumovské Steny is an approximately 12 km long, irregular and picturesque mountain ridge with rock formations, rugged gorges, rivers and beautiful panoramas. This area of ​​sandstone rocks has a network of hiking and mountain bike trails that vary in length and gravity. The main hiking route leads over the various peaks with many breathtaking viewpoints over the Broumovsko valley.

Hvezda: Here you will find the baroque chapel Hvezda (De Ster) and the restaurant Hvezda with outside terrace and breathtaking view over the Broumov valley. From here you can take wonderful walks, such as the route that leads you through the Kovarova Rokle gorge with the impressive high sandstone rocks on both sides.

Skály Bischofstein: In an idyllic spot in the middle of nature in the village of Skály lies the castle Bischofstein converted into a restaurant. It is surrounded by sandstone rocks, a picturesque lake and the ruins of a gothic castle formerly Katzenstein, now Castle Rocks (red route). Bischofstein has a large garden with playground, where, among other things, ice creams and small snacks are sold.

Teplice Skaly: National park with unique sandstone rocks. The nature reserve is characterized by closely spaced towering rock formations, gorges, rock walls and narrow passages. Teplice Skaly is a unique rock city with a walk of 2 1/2 hours. In the deep gorges the snow stays here normally until May / June. The walking route from Teplice Skaly to Adrspach Skaly and with a typical Czech train return is definitely recommended.

Adrspach Skaly: National park with whimsical sandstone rocks. At the start of the park is an azure blue lake with the rock formations in the background. The rocks of Adrspach extend over an area of ​​20 square kilometers. In the middle of the rocks there is a small lake in a gorge in the stream of the Metuije river and a 5 meter high waterfall.

Ostas: National park with a labyrinth of rock formations. A beautiful 2-hour walking route runs through the area. There are two smaller rock cities, the Upper Labyrinth and the Lower Labyrinth. The route also leads over the top of the hill with a number of very unique viewpoints over the Giant Mountains, the Broumovské Steny and the Javori Hory Mountains. For children it is a nice route, because of the labyrinth rocks and the shorter duration of the walk.

Javory Hory: This 25 km long mountain range is the border between the Czech Republic and Poland. A beautiful walking route runs through a wooded area over the tops of the Javori mountains with beautiful views. The route leads to the top of the highest mountain in this region, the Ruprechtice Spicak 880 meters with breathtaking views of the Giant Mountains, the Broumovské Steny and the Polish Mountains. There is also a single track mountain bike route running across the top, a real challenge for the avid mountain biker.

Gory Stolowe PL: National park in Poland called Table Mountains, because of its vast plateaus that consist of layers of sandstone that lie horizontally on top of each other. A beautiful route departs from Karlów to the Szczeliniec Wielki, the highest peak of the Table Mountains. Szczeliniec Wielki impresses with the amount and variety of rock formations. It is the largest so-called “Rock City” in Poland. On top of the mountain you can admire the panorama of the Sudetes. This view is considered to be the most beautiful panorama among the Polish mountains.

Gory Stolowe PL, Bledne Skaly: The labyrinths of Bledne Skaly, which were created by bizarre rock formations, are also very impressive. The sandstone rocks take fantastic shapes. Marked tourist routes have been laid out along the rock corridors. Also highly recommended for children.

Martinkovice: At the small airport in Martinkovice there is the possibility to glide on Saturday and Sunday. You can choose to have the glider lift with a winch or by a motor plane. Pulling up with a motor plane is very spectacular. You can also take a small motor plane to take a flight and explore the beautiful surroundings. The airport is located between Martinkovice and Broumov.

Broumov: Farma Wenet is a friendly animal farm, where you can walk in the middle of the animals and you can also pet them. The farm has a wide variety of animals such as donkeys, dromedaries, kangaroos, llamas, alpacas, etc. It is advisable to make an appointment in advance on telephone number 00420-777762305.

Broumov: Golf Club Grosshof is a golf course in Broumov with 9 holes and extensive training grounds. The course is also suitable for families with children. No reservation is required.

Mezimesti: A very modern outdoor swimming pool opened in June 2010. The pool has two large slides, a children’s pool for the little ones with a small slide and a water feature and a competition pool. There is an opportunity to buy something to eat, drink and ice cream. There is also a tennis court, children’s playground, a golf course and table tennis.

Mezimesti: Center Walzel is a completely renovated old textile factory, where you can play bowling, climbing, shooting and fitness, among other things. There is also a good restaurant. A great trip in bad weather.

Radkow PL: Recreational swimming lake in Poland with sunbathing meadows with the mountain “Koruna” at the background, the highest peak of the Broumovské Steny ridge. The lake is located in a beautiful area, near Bozanov and ideal for relaxing and enjoying the view. For children it is a nice place to swim and play.

Kudowa Zdroj PL: A beautiful area in Poland to fish for trout in peace. You do not need a fishing license for this and fishing rods and bait are available. Afterwards you can bake your own caught trout and enjoy your own catch. In this village there is also an indoor swimming / aqua park with slides, hot tubs and a sauna. A very nice trip, especially for children. There is also a spa here with daily concerts for spa guests.

Dvur Kralove: Beautiful zoo with the largest collection of African animals in Europe. You imagine yourself in the world of rhino, giraffe and other exotic animals. With a safari bus you can make a real safari trip among the wild animals. The zoo is highly recommended, especially for children! In Dvur Kralove there is also a large outdoor swimming pool.

Velky Drevic: There is a spectacular go-kart track in this village. The covered “mountainous” go-kart track (710 m) is something special in Europe. The track was built in an old factory and runs over two floors. Here you can still go karting at an attractive price.

Broumov: The historic town of Broumov with its cozy shops and terraces. The monastery is one of the most important sights in Broumov. The 17th-century church contains beautiful paintings and sculptures. There is a guided tour every hour. There are regular musical performances in the monastery. Broumov is also home to the oldest preserved wooden church from the Czech Republic.

Trutnov: Trutnov is the eastern entrance to the Giant Mountains. The square of Krakonos (Krakonosovo namesti) forms the historic center of Trutnov. It is a beautiful square with nice shops and cozy terraces.

Nachod: Nachod has a beautiful square, a beautiful theater and you can go shopping here. But especially the Renaissance castle that is located on a hill just above the city center is worth your visit. The castle also includes a French garden, an English park and a burial place for soldiers.

Nove Mesto nad Metuji: Nové Město nad Metují Castle is a National Cultural Monument. The castle from 1501 is part of the protected cityscape and has a beautiful castle garden. Nove Mesto nad Metuji is a nice historic town and is located on a rocky plateau, where the river Metuje flows. In the immediate vicinity of the city is the Peklo nature reserve, consisting of the romantic valley where the Metuje and Olešenka rivers meet. We recommend the restaurant Peklo, rebuilt from an old mill in a nice idyllic spot.

Osowka en Walim PL: Osowka and Walim PL: In the mountains of Walim in Poland, a huge complex of underground corridors was drilled at the end of the Second World War, probably as a factory for Hitler’s secret weapon. Viewing of a 750 meter long route is only possible with a guide. Underground there are also exhibitions about Hitler’s headquarters and about the underground armament industry of the Third Reich.

Czermna PL: The famous 18th-century skull chapel is located in this village in Poland. The walls and ceiling of this chapel are coated with 3000 human skulls. These are all victims of wars and plague epidemics, which at the time felled throughout the village. This chapel is comparable to the more famous chapel in the town of Kutna Hora in the Czech Republic. The tour lasts no longer than 10 minutes, so it is advisable to combine with another trip.

Wambierzyce PL: The village lies at the foot of the Gory Stolowe mountains in Poland and is a center of Maria worship. The basilica in Wambierzyce, a replica of St. Peter’s Church in Rome, is built in the Italian Baroque style with a monumental staircase. The basilica has a rich baroque interior with paintings and sculptures. Another attraction of Wambierzyce is a wooden moving nativity scene with 800 figurines, representing biblical scenes.

Prague: Beautiful capital of the Czech Republic with its historic churches, impressive cathedrals, old bridges and pleasant squares. Prague was declared the cultural capital of Europe in 2001. The many sights adorn the entire city, from Prague Castle to Charles Bridge. The Charles Bridge is a more than five hundred meter long historic pedestrian bridge that connects the Old City with the Small Side. In the summer, this romantic place is full of artists and street artists.

Janovicky: The nearest ski area with 2 drag lifts and rope tow. There is a possibility to take Englisch ski and / or snowboard lessons. You can rent equipment on site. In the Zamecek restaurant or Vyhlidka restaurant on the slopes you can enjoy a hot cup of chocolate milk and the magnificent view over the slopes, the Broumovské Steny mountain range and the Broumov valley. There are sled dog races in January. Furthermore, cross-country trails are plotted here.

Teplice nad Metuji: Ski area Kamenec in Teplice nad Metuji has 1 ski lift and a slope with a total length of 500 m. The descent is suitable for every skier. The track has snow cannons and is therefore fairly snow-sure.

Zieleniec: Ski area Zieleniec in Poland has 29 ski lifts and 22 km of runs with different lengths and levels of difficulty, suitable for both beginners and advanced skiers. The ski area is very snow-sure and also has snow cannons.

Janske Lazne en Cerna Hora: Beautiful ski area in the Giant Mountains. A cable car leaves from the village to the top of the Cerna Hora. There is a total of 12 km of slopes in this area, 7 km of which are blue, 3 km red and 2 km black. With no less than 3 kilometers, the longest descent of the Cerna Hora is very long for Czech standards. The village is a lot quieter and cheaper than the more famous places in the Giant Mountains. In the summer you can take the cable car up and there are plenty of opportunities for walking.

Pitch for 2 people with car and electricity included from € 18 per night. 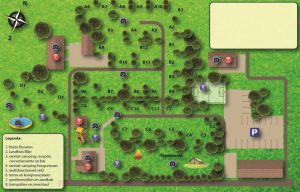 For a reliable weather forecast for this region we recommend: